Domestic violence is a pattern of coercive, controlling behavior that can include physical abuse, emotional or psychological abuse, sexual abuse or financial abuse.

Sexual Abuse
Sexual abuse is common in abusive relationships, but often the least discussed. It can be subtle or overt. The impact on the victim is commonly feelings of shame and humiliation.

Sexual abuse may include: physically forcing sex, making you feel fearful about saying no to sex, forcing sex with other partners, forcing you to participate in demeaning or degrading sexual acts, violence or name calling during sex, and denying contraception or protection from sexually transmitted diseases.

Emotional Abuse
Emotional abuse occurs in some form in all abusive relationships. It is an effective tactic used by abusers to obtain power and control and it can cause extreme damage to the victim’s self-esteem. Commonly, emotional abuse makes the victim feel like they are responsible for the abuse and to feel crazy, worthless and hopeless.

Emotional abuse can include: constant put downs or criticisms, name calling, “crazy making”, acting superior, minimizing the abuse or blaming you for their behavior, threatening and making you feel fearful, isolating you from family and friends, excessive jealously, accusing you of having affairs, and watching where you go and who you talk to.

Financial Abuse
This form of abuse is one of the least commonly known but one of the most powerful tactic of entrapping victims in the relationship. Many survivors of abuse describe it as the main reason that they stayed in an abusive relationship or returned to one.

Some forms of financial abuse include: giving you an allowance, not letting you have your own money, hiding family assets, running up debt, interfering with your job, and ruining your credit. 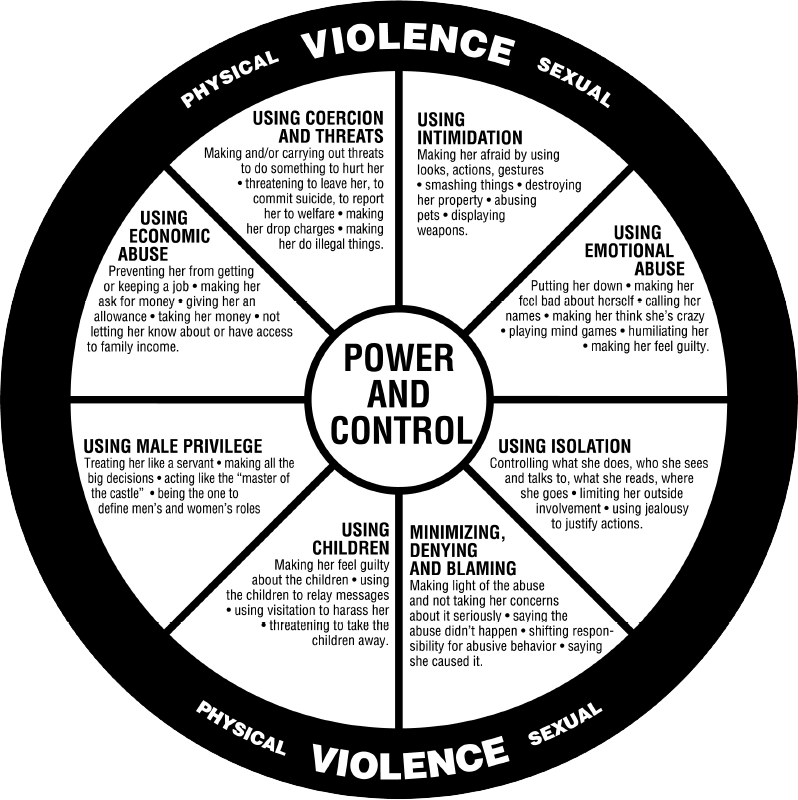 Domestic violence encompasses a spectrum of behaviors that abusers use to control victims. The following list compiled by NNEDV includes warning signs that someone may be abusive.

Warning signs include someone who:

Abuse is never the fault of the victim and it can be hard for many reasons, including safety, to end the relationship. If you experience these “red flags,” you can contact us. If you believe someone you know is being abused, offer nonjudgmental support and help.